Making their debut at the Aldeburgh International Festival in 2018, The Orsino Ensemble is a flexible format chamber ensemble with a central focus on the five outstanding wind players at its core. Each a leader in their field, the group’s members are committed to showcasing the depth and versatility of the wind chamber repertoire; expanding and reducing the ensemble’s format as needed across their different programmes.

Their debut album, recorded with pianist Pavel Kolesnikov for Chandos Records, focuses on French repertoire of the Belle Epoque period, and is released on the 2nd April 2021 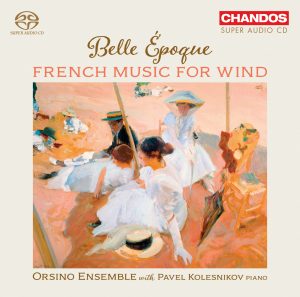 This CD is available to purchase at: https://www.chandos.net/products/catalogue/

Described by The Guardian as ‘an outstanding performer… his playing… remarkable’, Adam Walker has established himself at the forefront of a new generation of wind soloists. He studied with Gitte Sorensen at Chetham’s School of Music and with Michael Cox at the Royal Academy of Music, graduating with distinction in 2009 and winning the HRH Princess Alice Prize for exemplary studentship. That year, at the age of twenty-one, he was appointed principal flute of the London Symphony Orchestra and received the Outstanding Young Artist Award at MIDEM Classique; in 2010 he won a Borletti-Buitoni Trust Fellowship and was shortlisted for the Young Artist Award of the Royal Philharmonic Society. He performs regularly as a soloist with the major UK orchestras, including the BBC Philharmonic, BBC Scottish Symphony Orchestra, London Symphony Orchestra, Hallé, Ulster Orchestra, Scottish Chamber Orchestra, and BBC National Orchestra of Wales, and further afield has appeared at the Grant Park Music Festival in Chicago and with the Baltimore Symphony Orchestra, Seattle Symphony, Seoul Philharmonic Orchestra, Auckland Philharmonia Orchestra, Malaysian Philharmonic Orchestra, Malmö Symfoniorkester, Tampere Filharmonia, Wiener Kammer Orchester, Solistes Européens, Luxembourg, and RTÉ National Symphony Orchestra.

A committed chamber musician with a curious and creative approach to repertoire, Adam Walker took up his place on the prestigious Bowers Program of the Chamber Music Society of Lincoln Center in 2018, touring with the Society both at Lincoln Center and across the United States for three seasons. Soon after, he launched the Orsino Ensemble, focusing on the repertoire for wind quintet. Recent highlights of his chamber music activities include appearances at LSO St Luke’s, deSingel in Antwerp, Musée du Louvre, Elbphilharmonie Hamburg, Alte Oper Frankfurt, and chamber music festivals of Utrecht, West Cork, Delft, and Moritzburg. He appears regularly at the Wigmore Hall, London, where he has recently collaborated with Brett Dean, Tabea Zimmermann, Cédric Tiberghien, Angela Hewitt, Mahan Esfahani, Ailish Tynan, and Sean Shibe. Adam Walker was appointed professor at the Royal College of Music in 2017. 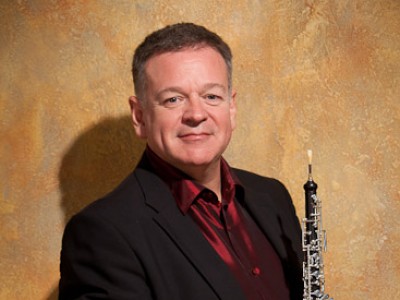 Nicholas Daniel has long been acknowledged as one of the world’s great oboe players, and is one of Britain’s best known musicians. In a distinguished career that began more than four decades ago he has become an important ambassador in many different musical fields, and has significantly enlarged the repertoire for his instrument with the commissioning of hundreds of new works.

Nicholas dedicates his life to music in many varied ways. He records and broadcasts widely, including regular recordings on the Harmonia Mundi Label, and he boasts a huge following internationally on social media. He is proud to support and patronise many important initiatives, charities and trusts, and has directed several music festivals and concert series, most notably in Germany and Dartington, and has been Music Director of the Leicester International Music Festival and lunchtime series for many years. He is highly sought after as a teacher, being Professor at the Trossingen Musikhochschule in Germany and at the Guildhall School of Music in London.

Following his BBC Proms conducting debut in 2004, he works with many fine ensembles in wide-ranging repertoire ranging from Baroque to contemporary, and from small groups to opera. He is Music Director of Triorca, an orchestral project which brings together talented young musicians from Serbia, Germany and the UK. In recognition of his achievements he was honoured in 2012 by Her Majesty Queen Elizabeth II with the prestigious Queen’s Medal for Music, and cited as having made “an outstanding contribution to the musical life of the nation”.

Having sung as in the choir of Salisbury Cathedral as a boy, Nicholas was put directly into the spotlight at the age of 18 when he won the BBC Young Musician of the Year competition. After a short period of study at London’s Royal Academy of Music, with Janet Craxton and Celia Nicklin and then privately with clarinettist Anthony Pay and with Hans Keller, he quickly established his career with early debuts at the BBC Proms and on disc.

He has been a concerto soloist with many of the world’s leading orchestras and conductors, performing a huge range of repertoire from Bach to Xenakis and beyond, premiering works written for him by composers including Harrison Birtwistle, Henri Dutilleux, James MacMillan, Thea Musgrave, John Tavener and Michael Tippett, as well as encouraging many younger composers to write for the oboe. His recording of concertos by Vaughan Williams and MacMillan was awarded the BBC Music Magazine Premiere Award in 2016.

As chamber musician Nicholas is a founder member of the award-winning Britten Sinfonia, the Haffner Wind Ensemble and the Britten Oboe Quartet, whose debut disc was released to great acclaim on the Harmonia Mundi label in 2017. He also works regularly with the pianists Charles Owen and Julius Drake, and with many leading string quartets including the Carducci and Vogler. He is principal oboist of Camerata Pacifica, California’s leading chamber music ensemble, and is a popular guest at music festivals all over the world.

Nicholas Daniel is proud to play the world’s first ‘fair-trade’ oboe, certified by the Forest Stewardship Council and made especially for him by Marigaux in Paris. 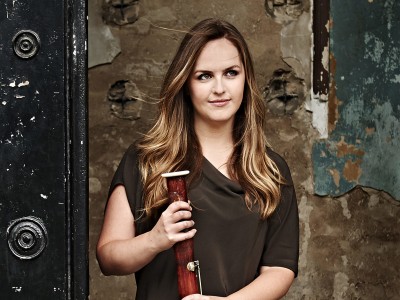 Sought after as a soloist and chamber musician, Amy regularly takes part in festivals across Europe, including the Pärnu, Tbilisi and West Cork festivals. She is currently Principal Bassoon of the Aurora and ENO orchestras, having previous held the position with the Philharmonia Orchestra.

A passionate advocate for the bassoon, Amy is much sought after as a soloist, chamber musician, teacher and communicator, regularly featuring on BBC Radio 3.

As a soloist highlights have included appearing with Birmingham Opera in Stockhausen’s Mittwoch aus Licht and performing Strauss’s Concertino with English Chamber Orchestra. She regularly takes part in festivals across Europe, including the Parnu, Tbilisi, West Cork, Ryedale, Bath, Galway and Mizmorim Festivals. In 2017 she returned to Wigmore Hall and was featured artist at Southwell Music Festival.

Engagements this season include a performance of Mozart’s Concerto at the Festival Suoni dal Golfo in Lerici, Italy with Orchestra Excellence, and recitals throughout the UK including Saffron Hall, Brighton Dome, Music in the Round and the Royal Conservatoire Scotland.

In 2011 Amy was appointed principal of the Philharmonia Orchestra at the age of 23. Sought after as guest principal with leading orchestras in Europe including the Mahler Chamber, London Symphony and BBC Symphony Orchestras, she is currently principal of Aurora Orchestra and ENO.

As a chamber musician Amy has collaborated with Aleksander Madzar, Nicholas Daniel, Radovan Vlatkovic, Natalia Gutman, Chen Halevi, Guy Johnston, the Castalian and Chilingirian Quartets, among many others. She has attended Open Chamber Music at IMS Prussia Cove with Elisabeth Leonskaja, and in 2016 toured California with Camerata Pacifica. Since 2010 she has been a member of Ensemble 360.

Born in London, Amy Harman studied at the Royal College of Music with Andrea de Flammineis, Julie Price and Martin Gatt, and with František Herman at the Hudební Fakulta Akademie Múzických Umění in Prague. Between 2010-2011 she was Principal Bassoon of the BBC National Orchestra of Wales.

Amy is a Professor at the Royal Academy of Music. 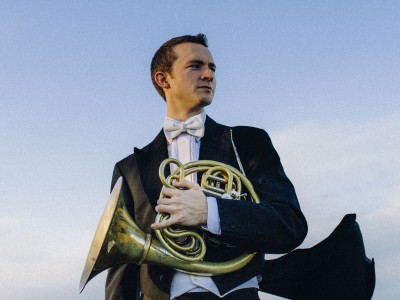 Principal Horn of the Scottish Chamber Orchestra, Alec Frank-Gemmill divides his time between concertos, recitals, chamber music and orchestral playing. He was Artist in Residence at the 2013 Lammermuir Festival and made his Wigmore Hall debut the same year. He has since gone on to perform as a soloist at numerous festivals including Spitalfields, Ryedale, Mecklenburg-Vorpommern and St. Magnus.

Alec was a member of the BBC New Generation Artists scheme 2014-16, appearing as soloist with the BBC orchestras on numerous occasions, including performances of rarely-heard repertoire by Ethel Smyth, Malcolm Arnold and Charles Koechlin. With his own orchestra, the SCO, he has performed concertos by Mozart (on the natural horn) with Richard Egarr, Ligeti and Strauss with Robin Ticciati, Schumann with John Eliot Gardiner and Macmillan with Andrew Manze.

Often invited as a guest principal horn, Alec has frequently appeared with the Royal Concertgebouw Orchestra, London Symphony Orchestra and Chamber Orchestra of Europe. As a soloist, he has long been keen to explore the solo repertoire of the baroque era and to champion the use of instruments from the 19th century. A grant from Creative Scotland has also enabled Alec to develop his interest in historical performance. He appears regularly as part of period-instrument ensembles, most notably with Ensemble Marsyas. He is also the recipient of a Borletti-Buitoni Fellowship and in early 2017 released a recording of 19th Century works for horn and piano with Alasdair Beatson on the BIS label.

Alec was recently appointed Professor of Horn at the Guildhall School of Music and Drama, having himself studied in Cambridge, London and Berlin with teachers including Hugh Seenan, Radovan Vlatković and Marie-Luise Neunecker. 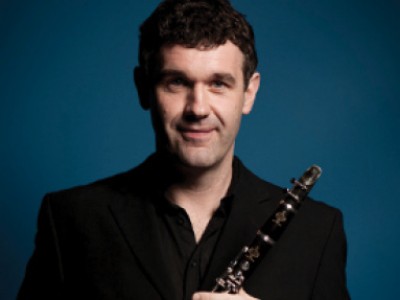 One of Britain’s leading clarinettists, Matthew Hunt is a distinctive musician, renowned for the vocal quality of his playing and his ability to communicate with audiences. He holds the position of solo clarinettist with the Deutsche Kammerphilharmonie Bremen, and is a member of the Sheffield based chamber group Ensemble 360. A very keen chamber musician, he appears regularly with Meta4, the Chiurascuro and Elias quartets, Thomas Adès, Pekka Kuusisto, Emily Beynon, Nicholas Altstaedt, Alina Ibragimova, and La Bande de La Loingtaine. He has also appeared as a guest of the Berlin Philharmonic as a soloist in their series at the Berlin Philharmonie Kammermusik Saal.

Matthew’s plans for this season include appearances at festivals including Lockenhaus (Austria), Kaposvar (Hungary), Kuhmo (Finland) and Charlottesville (United States), and concerto appearances with the Deutsche Kammerphilharmonie and Paavo Jarvi, and with the Georgian Chamber Orchestra, Ingolstadt. As an orchestral musician, Matt a regular guest principal with the Academy of St Martin in the Fields and has appeared as a guest principal with the Concertgebouw and BBC Symphony Orchestras and the Chamber Orchestra of Europe.

Matthew’s recording for ASV of Mozart’s Clarinet Quintet with the Elias quartet was met with critical acclaim, with the BBC Music Magazine hailing it with five stars as “the Benchmark recording of this much recorded work”.

“The clarinettist played so beautifully it was as though he wished to make the very air of the hall melt” Tokyo Times.